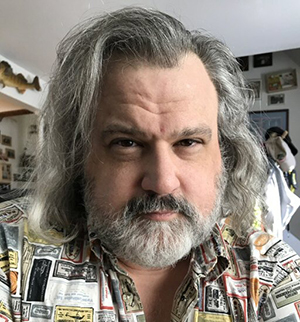 Joe Konrath has sold more than three million books in twenty countries. He's written over forty novels and over a hundred short stories in the mystery, thriller, horror, and sci-fi genres. Known for combining incredible action, hair-raising scares, and big laughs, Konrath has received over 10,000 Amazon reviews for his work, averaging 4.2 stars out of 5. He's been a #1 Amazon bestseller on three different occasions, and has been in the Top 100 bestseller lists over twenty times. He's twice won the Love is Murder Award for best thriller, and has also won the Derringer Award, and the Ellery Queen Readers Choice Award, and has been nominated for many others including the Anthony, Macavity, and Gumshoe. Konrath edited the collection These Guns For Hire, and his fiction has appeared in dozens of magazines and anthologies including Ellery Queen, Alfred Hitchcock, Cemetery Dance, The Strand, Thriller edited by James Patterson, and Wolfsbane & Mistletoe edited by Charlaine Harris (True Blood).

He's considered a pioneer in self-publishing. His blog, A Newbie's Guide to Publishing, gets several million hits per year, and Konrath has been featured in Forbes, Entertainment Weekly, Newsweek, Playboy, USA Today, Time, Woman's World, the LA Times, and the NY Times among many other periodicals. He also blogs for the Huffington Post.

The best way to keep up with his latest news is to sign up for his newsletter.