These novels put an emphasis on scares, chills, and getting your heart racing.

A billionaire Senator with money to burn...

A thirty year old science experiment, about to be revealed...

History is about to repeat itself.

Thriller writer Joe Konrath, author of the Lt. Jack Daniels series, digs into the vaults and unearths a technohorror tale from the depths of hell...

1906—Something is discovered by workers digging the Panama Canal. Something dormant. Sinister. Very much alive.

2009—Project Samhain. A secret underground government installation begun 103 years ago in New Mexico. The best minds in the world have been recruited to study the most amazing discovery in the history of mankind. But the century of peaceful research is about to end.

Because it just woke up.

When linguist Andrew Dennison is yanked from his bed by the Secret Service and taken to a top secret facility in the desert, he has no idea he's been brought there to translate the words of an ancient demon.

He joins pretty but cold veterinarian Sun Jones, eccentric molecular biologist Dr. Frank Belgium, and a hodge-podge of religious, military, and science personnel to try and figure out if the creature is, indeed, Satan.

But things quickly go bad, and very soon Andy isn't just fighting for his life, but the lives of everyone on earth...

All hell is about to break loose. For real.

Nestled in the woods of Wisconsin, Safe Haven is miles from everything. With one road in and out, this is a town so peaceful it has never needed a full-time police force. Until now...

A helicopter has crashed on the outskirts of town and something terrible has been unleashed. A classified secret weapon programmed to kill anything that stands in its way. Now it's headed for the nearest lights to do what it does best. Isolate. Terrorize. Annihilate.

Soon all phone lines are dead and the road is blocked. Safe Haven's only chance for survival rests on the shoulders of an aging county sheriff. And as the body count rises, the sheriff realizes something even more terrifying—maybe death hasn't come to his little town by accident...

Are you afraid of the dark? You will be.

It was supposed to be a harmless camping trip. Six wayward teenagers who'd run into trouble with the law, and their court-appointed guardians, Sara and Martin Randhurst. Three nights on a small, deserted island off of Michigan's upper peninsula. A time to bond, to learn, to heal.

Then Martin told a campfire story about the island's history. Of the old civil war prison hidden in there, and the starving confederate soldiers who resorted to cannibalism to stay alive. Everyone thought it was funny. They even laughed when Martin pretended to be dragged off into the woods.

But Martin didn't come back. And neither did Sara when she went in search of him.

Then the laughter stopped.

The group soon began to realize that this deserted island wasn't so deserted after all. And perhaps Martin's ridiculous story had more truth to it than anyone thought.

What's the most horrifying thing you can imagine?

This is a hundred times worse...

It starts where other horror ends.

WELCOME TO THE RUSHMORE INN

The bed and breakfast was hidden in the hills of West Virginia. Wary guests wondered how it could stay in business at such a creepy, remote location. Especially with its bizarre, presidential decor and eccentric proprietor.

ONCE YOU CHECK IN...

When the event hotel for the national Iron Woman triathlon accidentally overbooked, competitor Maria was forced to stay at the Rushmore. But after checking into her room, she quickly realized she wasn't alone. First her suitcase wasn't where she put it. Then her cell phone was moved. Finally, she heard an odd creaking under the bed. Confusion quickly turned to fear, and fear to hysteria when she discovered the front door was barred and the windows were bricked over. There was no way out.

...YOU'LL BE DYING TO LEAVE

One year later, four new female athletes have become guests of the Inn. Will they escape the horrors within its walls? Or will they join the many others who have died there, in ways too terrible to imagine?

Are you brave enough to finish?

**Haunted House is a stand alone horror novel, and can be enjoyed without having read any other Joe Konrath book. But it features characters from five other novels: Origin, The List, Afraid, Trapped, and Endurance.**

It was an experiment in fear.

Eight people, each chosen because they lived through a terrifying experience. Survivors. They don't scare easily. They know how to fight back.

Each is paid a million dollars to spend one night in a house. The old Butler House, where those grisly murders occurred so many years ago. A house that is supposedly haunted.

They can take whatever they want with them. Religious items. Survival gear. Weapons. All they need to do is last the night.

But there is something evil in this house. Something very evil, and very real. And when the dying starts, it comes with horrifying violence and brutal finality.

There are much scarier things than ghosts.

Things that will kill you slowly and delight in your screams.

Things that won't let you get out alive.

People are dying to leave

Someone is stalking webcam models.

He lurks in the untouchable recesses of the black web.

When watching is no longer enough, he comes calling.

He's the last thing you'll ever see before the blood gets in your eyes.

Chicago Homicide Detective Tom Mankowski (The List, Haunted House) is no stranger to homicidal maniacs. But this one is the worst he's ever chased, with an agenda that will make even the most diehard horror reader turn on all their lights, and switch off all Internet, wifi, computers, and electronic devices.

Joe Konrath reaches down into the depths of depravity and drags the terror novel kicking and cyber-screaming into the 21st century.

I'm texting you from inside your closet. Wanna play? :)

A beautiful doctor with an illicit desire.

A millionaire businessman indulging a passion for murder.

And a human guinea pig who has been awake for seven straight weeks.

What Happened to Lori: The Complete Epic (Book #9)

Each has a secret.

Each has an agenda.

All three are liars.

One of them committed a terrible crime.

One of them is on the run.

More than one of them is a killer.

These three people are about to find out what happened to Lori.

And they're going to wish they never did...

WHAT HAPPENED TO LORI: THE COMPLETE EPIC by JA Konrath Is she dead? Or is it much worse? 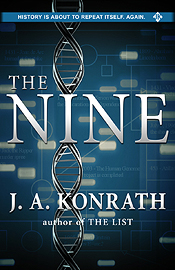 After former Chicago Cop Tom Mankowski found out the truth behind his birth, he discovered others with the same secret. Some want to live out their lives in hiding. Some are fighting to make the world better. And some are trying to destroy all life on earth.

Tom, and the friends he made during the blockbuster bestseller THE LIST, have reunited to take down this dangerous government experiment, one engineered hisotrigal figure at a time. Setting them on a crash course with the worst villains mankind has even known.

THE NINE by JA Konrath Send in the clones... 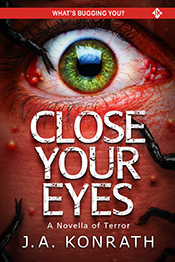 New species are being discovered every day.

Some of them are harmful to man.

Rick and his friends are about to find out how harmful.

CLOSE YOUR EYES by JA Konrath What is bugging you? 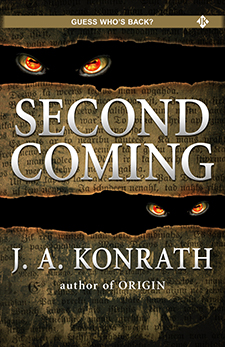 In 1906, a demon was unearthed in Panama, and confined to a secret government testing facility.

As a rash of strange and horrible deaths plague the United States, only a few key people know what's really happening. But do they know enough to prevent the coming apocalypse?

Join the surviving characters from Konrath's previous dark thrillers as they band together to stop hell on earth. Literally.

SECOND COMING by JA Konrath Shout at the devil

Linguist Andy Dennison-Jones knows this all too well. He and his veterinarian wife, Sun, have been chased by them before, and barely escaped from a secret underground government facility with their lives.

Now they once again find themselves trapped alongside a collection of creatures straight out of hell. Fighting with them is an unlikely group of misfits, including a misplaced British kid, a former spec-ops soldiers, and a strange Irishman who might be the oldest living thing on earth—if he's even alive at all.

Filled with the kind of slam-bang action, wicked scares, and sly humor that have earned Joe Konrath and Iain Rob Wright millions of fans, HOLES IN THE GROUND is both a collaboration and a continuation of both authors' previous work (ORIGIN by Konrath and FINAL WINTER by Wright) but also serves as a perfect introduction to their universes.

HOLES IN THE GROUND
Some secrets have teeth.

Mortimer Moorecook, retired Wall Street raider, avid collector, is losing his fight against cancer. With weeks to live, a package arrives at the door of his hillside mansionoan artifact he paid millions for a hominoid skull with elongated teeth, discovered in a farmer's field in the Romanian countryside. With Shanna, his beautiful research assistant looking on, he sinks the skull's razor sharp fangs into his neck, and immediately goes into convulsions.

OPENS THE DOOR TO AN ANCIENT EVIL...

A rural hospital. A slow night in the ER. Until Moorecook arrives strapped to a gurney, where he promptly codes and dies.

WHERE DEATH IS JUST THE BEGINNING.

Four well-known horror authors pool their penchants for scares and thrills, and tackle one of the greatest of all legends, with each writer creating a unique character and following them through a vampire outbreak in a secluded hospital.

The goal was simple: write the most intense novel they possibly could.

Randall just wanted to have a fun summer vacation with his family, visiting Grandma at her cabin on a lake in the Wisconsin Northwoods.

Then everything went horribly wrong.

Join fifteen-year-old Randall, and his younger brother Josh, as they fight for their lives on the eve of an elderly undead apocalypse.